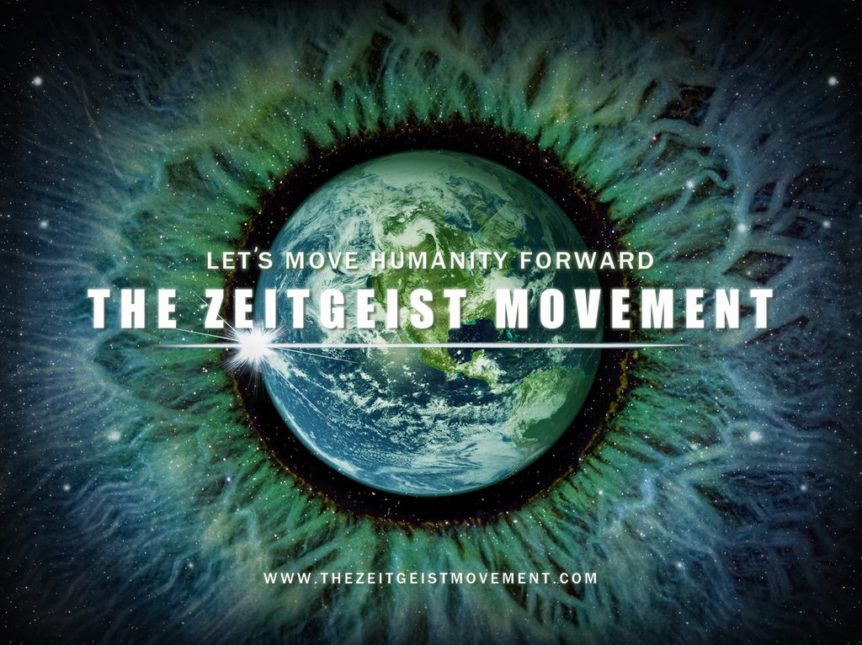 The Zeitgeist Movement is an activist group founded by independent producer, filmmaker and performance artist, Peter Joseph, in the United States in 2008, shortly after the release of Zeitgeist: Addendum, the second film in the Zeitgeist trilogy. The Zeitgeist Movement is predominantly an educational community conducting research and public awareness programs in a bid to awaken the society toward a more sustainable and egalitarian social system. The nonprofit organization describes itself as a global grassroots movement advocating social change, most importantly, that of society transitioning from a monetary based economy to a resource-based economy.

From its social campaigns and publications, The Zeitgeist Movement believes that market capitalism is structurally corrupt and wasteful of resources. Also, the nonprofit group believes that historic religious concepts are misleading, and recommends sustainable ecology and scientific administration of society. The movement’s activist work does only not involve analysing the lapses of our current outmoded economic strategy and its negative consequences, but also advocating a new train of thought in favor of an entirely different mechanism of economic and social organization.

The Zeitgeist Movement and the Natural Law Resource Based Economy (NLRBE)

NLRBE or “Natural Law Resource Based Economy” is a term coined by Peter Joseph, which incorporates Natural Law into the original Jacque Fresco’s Resource Based Economy.  The core of The Zeitgeist Movement’s proposed social mechanism is the Natural Law Resource Based Economy (NLRBE). The NLRBE is not a centrally planned system. Rather, it is a Collaborative Design System (CDS) and is based majorly upon public interaction, facilitated by programmed, open-access systems, that enhance a constant, dynamic feedback exchange. This means that the actual blueprint for this interactive system would be available in an open source platform for public consideration, in an absolutely transparent manner.

Overall, the aim of the NLRBE is to increase quality of life for all humans while maintaining sustainability in the long run. In summary, the social goals of the mechanism are:

Also, the macroeconomic components  of The Zeitgeist Movement’s NLRBE are Global Resource Management; Global Demand Assessment, which includes creating awareness of new technical possibilities and public consensus to decide necessities to be produced; and Global Production and Distribution Protocols, which includes the aspects of facility location, method of access, and tracking & feedback. Similarly, the microeconomic components of the NLRBE include optimized durability and adaptability, universal standardisation, and integrated recycling techniques among others.

The Zeitgeist movie series comprises three documentary films produced by Peter Joseph released between 2007 and 2011. The movies which have been translated into over 40 languages, screened in over 150 countries and seen by an estimated total of 300 million people, present some conspiracy theories and also propose some techniques to influence universal social and economic changes.

The first in the Zeitgeist film trilogy is the 3-part Zeitgeist: The Movie released in 2007. The film exposes several conspiracy theories especially about the 9/11 terrorist attacks. The 4-part sequel titled Zeitgeist: Addendum was released in 2008. The film addresses issues like how people are manipulated into economic slavery through debt-based monetary policies and exposes how the US prioritizes profiteering above everything else. Jacque Fresco and his esteemed futuristic center, The Venus Project come to the limelight in this film. The film also highlights Jacque Fresco’s proposed resource-based economy, prioritizing environmental sustainability and abundance as fundamental societal goals. In it, Fresco also describes technology as the primary driver of human advancement, and describes politics as an inefficient tool.

Finally, the 4-part Zeitgeist: Moving Forward is the third installment in Peter Joseph’s Zeitgeist film series. Premiered in 2011, the film concludes that social environment and cultural conditioning majorly influences human behavior and speculates that the current money-based financial system will result in hyperinflation in the future. Similar to its prequel Zeitgeist: Addendum, the film presents a “resource-based economy” as advocated by Fresco and also discusses how human civilization could start afresh in relation to resource management to curb wastage and enhance sustainability.

Peter Joseph announced that he was launching a brand new film set titled InterReflections. The first of the new series, InterReflections I has a new narrative-based, live-action style. The new film ditches the traditional documentary style and explores an experimental style combining fantasy, abstraction, thriller, dark humor and a mixed film style. According to Joseph, the new movie uses “the idea of ‘hindsight’ as a driving motif to inspire the audience to think differently about the world we have today… and the world we could have tomorrow.”

Initially billed for release in 2016, the long-awaited and highly-anticipated live action film’s premiere was delayed due to the technical requirements of its production. The producer had to work with a tight budget and limited labor resources which highly slowed the production of the film. Scheduled for premiering on January 26th 2020 in Los Angeles, California, the first in the 3-part series breaks the ground and defines the tone of the trilogy. In summary, the major aim of the InterReflections trilogy is to expose the distortion in modern “normality” by awakening the audience intellectually.

The Zeitgeist Movement and The Venus Project

The Zeitgeist Movement first started out as the “activist arm of the Venus Project”, a Florida-based nonprofit venture initiated in 1994 by designer and social engineer Jacque Fresco. However, in April 2011, the ties between the two groups were officially severed over what seemed to be a power tussle between the leaders of both groups.

However, despite the disunion between the two organizations, The Zeitgeist Movement still continues to promote the resource-based economy paradigm, and the group holds an annual event, Z-Day (or Zeitgeist Day), to promote education and awareness.