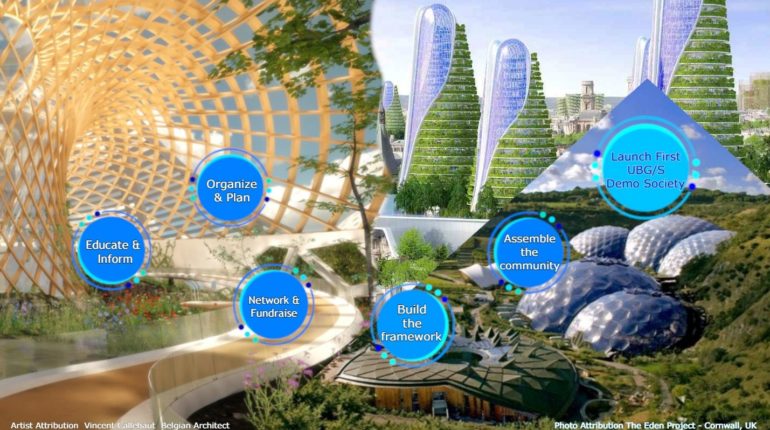 Here at Moneyless Society, it is our mission to facilitate a space that functions as a post-scarcity informational resource hub, providing utility for individuals to come together in the name of implementing a moneyless society and resource based economy.

But that’s far from all!

Below is a brief explanation of the Moneyless Society timeline, illustrating the steps between now and materializing the foundation of a socioeconomic transition. Read on to learn a little about each step.

Awareness of systemic issues and an objective understanding of the current system and its many moving parts, are crucial to successfully informing humanity of the choices we have to make in order to avoid certain disaster and not only survive, but thrive into the future.   As you can see per the above illustration, the process isn’t linear – there are parallels along the way to the end goal of building an egalitarian society. While the journey begins with educating and informing the public on the fallacies of the current system, it far from ends there and in fact, that step will continue in perpetuity as we evolve as a species.

As for the short term, the goal is to catch everyone up to speed and provide the resources needed to gain a comprehensive understanding of the dialogue being used in the post-scarcity circles. Moneyless Society aims to accomplish this step by flooding the internet with literature, practicing inclusiveness with anyone who wants to learn, and networking with boots on the ground. So far, we can offer the following tools –

Resources (for learning and networking)

Any successful plan requires the minds and hands of many. Moneyless Society is an inclusive space that centers all progress on the practice of collaboration. Like the educate and inform phase, this step will also take place in parallel to the rest of the transition, as the process of orchestrating such an ambitious project will be an ever emergent one that will inherently require the participation of many.  We welcome and invite anyone, “professional”, “laymen” – everyone – with the desire, skillset or urge to join the effort, to contact us.

We are currently in the thick of this phase and continuously building out our teams, from social media support to exploratory boards.

See some of our current volunteers below. Tap the edges of each card to cycle through.

Networking – If you’re looking for support in your decision to seek an alternative way of life to what we know now, you’ve come to the right place. Moneyless Society Group is refining its networkability everyday. And the more people like yourself that join the conversation, the closer we get to breaking through to another level of communication that facilitates the level of networking needed to bring the Moneyless Society concept to fruition. Aside from the group, we have a discord channel as well as a team dedicated to actualizing the highest potential of humanity. We are constantly reaching out into the world to connect  people with others who can and will support their choices and projects as well as help further Moso’s goals. You can check into the group and Discord here and look into other active communities here.

What’s this? , you say. “You need money to build a Moneyless Society?

Have you ever built a deck from repurposed lumber? Or repaired a newer car with interchangeable parts from an older one? Does the term “retrofitting” ring a bell? How about the phrase “build the new world with the bones of the old one”? Your probably get the hint by now, but for clarity’s sake, the following –

The society we all want to live in won’t be built without first paying into the system that’s holding the materials we need, for ransom.

Also, waiting on societal collapse to take place should not be the goal, nor it so a feasible one if we, the human race, actually intend to survive the currently dire ecological and economical conditions. Every new phase of existence is but a new evolution of the previous socioeconomic model. Moneyless Society proposes a transition be facilitated through which the salvageable and purposeful infrastructure of today lends to the new, resilient and regenerative framework of tomorrow. In short, we can use money to obsolete money by applying its value directly to the people and projects that are actively building the new world – a Resource Based Economy.

Give if you can and only what you can by clicking here. Everything helps and all is appreciated.

Now we’re getting to the really exciting stuff! With enough financial support, but also enough human-powered action, we can begin to erect the infrastructure of the very first Moneyless Society Community! During this step/phase, tangible construction will begin on building worker/housing co-ops, merging advanced technology with agriculture and daily services that are essential to a highly functioning society. This time of action will likely demand the most patience as buildings are being built, technology is being implemented and tested and we are learning from our mistakes in order to improve on an evermore beneficial version of a Moneyless Society. If you have any skillsets or experience that could come in handy here, or perhaps some assets such as heavy equipment or land you’d like to donate for use, please contact us now to get the ball rolling for later!

During this time, the very first residents of the very first Moneyless Society model, will be welcomed into their new homes and places of purpose. People from all walks of life who’ve contributed to the fruition of this development will assume their roles in the new community. During this assembly, residents will become oriented with and accustomed to their new socioeconomic environment and a life of abundance via open access to goods and services. This phase will be devoted to a celebration of achievement, a careful analysis of feasibility and preparation for the next, most important step –

The end goal is near but still out ahead of us as this achievement marks only the first of many more to come. The realization of the first Universal Basic Goods and Services Demonstration Community will mark the beginning of a new era and mode of human existence. With the success of step 4 comes the responsibility of replicating step 5, the world over. The first Moneyless Society UBG/S community will serve as a tangible demonstration hub for which to host workshops about everything sustainable, regenerative, collaborative and technical whilst facilitating the funding and pollinating of such communities when and wherever others choose to build them. In essence, a flower that spreads seeds of life, carried far and wide by its supporters and resource based economy supporters, ultimately pollinating enough of the population with the moneyless society concept to bridge the gap of differences between individuals and nations alike, leading to a holistic and synergistic transition in the long-term while more quickly meeting people’s everyday needs and desires in the short term.

A little more about our values –

It is our hope that people from all walks of life will find haven to bridge differences, circulate ideas, unite for change and ultimately form fully functioning, sustainable communities that will host housing, products and services. To eliminate the need for money is to initiate abundance of what is needed to not only survive, but to thrive.

In an effort to network and organize information, individuals, resources, news and happenings regarding any and all activity within the nature of a resource based economy/moneyless society, you are invited to participate in this world changing movement.

For more information on what is a Moneyless Society and how it can work, click here.

Thank you for being here. Together we can get there.