The Green New Deal is a resolution that lays out a plan for tackling climate change and promoting social justice and equity. It was introduced in February of 2019 by representative Alexandria Ocasio Cortez and Senator Edward J. Markey of Massachusetts It calls for massive public investment in renewable energy and other sustainable projects with the goal of transforming American society to meet the challenge of climate change. It also focuses on addressing issues of inequality, discrimination, and oppression, and promotes justice through the investment in communities, sustainable/regenerative agriculture, green energy, and infrastructure, and the creation of millions of jobs. Examing the Green New Deal pros and cons can help us understand where the benefits and drawbacks of this legislation lie.

Naturally, and to no surprise, the proposal has been blasted by conservatives as a socialist plot to take over the country (or possibly the entire world) while decimating the American economy. This would force the public into submission under radical, progressive leaders, bent on becoming dictators and ruling over the American people in a violent, oppressive, authoritarian communist society.

Back in reality, however, the Green New Deal has little chance of being adopted at any point in the near (or distant) future, since capitalist interests still rule the day and have no desire to enact any measures that could potentially reduce profits. Furthermore, the Green New Deal itself doesn’t really address the systemic issues that are causing many of the problems we are experiencing to begin with.

Even if it were to be fully adopted and implemented, it is still slow, incremental change. It is nothing more than a band-aid on a broken arm, so to speak. The greater underlying problems plaguing our society would still remain, and our socio-economic system would still need fundamental restructuring in order for the issues to be properly addressed.

Green New Deal Pros: The Green New Deal would, first and foremost, provide at least some sot of progress on addressing climate change. As it is right now, the pace of change is excruciatingly slow (or nonexistent) so anything at all is better than nothing. At the very least, the Green New Deal would begin to address and enact a portion of the fundamental changes that need to happen. So, it would at least be a start.

In this regard, it would ensure that the United States transportation and energy sectors would transition over to renewable energy sources within ten years, and it mentions putting forth a massive work program to achieve this. The document also mentions soil health and sustainable forms of agriculture, so we assume this would mean large-scale implementation of regenerative farming practices in the United States. This focus on carbon sequestration through natural methods and improving soil health would also curtail a large amount of greenhouse gas emissions from the agriculture sector.

Another pro is that the legislation would also provide millions of jobs to build the infrastructure necessary to support the transition over to clean energy. This job activity would also give a much-needed jump-start to the US economy. This could cause an economic boom in the green energy sector, which would be beneficial for both Americans and American companies because it would make US corporations more competitive on a global scale.

It has also been shown that the Green New Deal would also create more jobs than the fossil fuel industry, at comparable wages. The resolution would also help tackle poverty. Massive funding avenues would become available to combat some of the more systemic causes of inequality. This would provide money for investments in infrastructure and historically oppressed or impoverished communities, which would help bring equity to and promote social justice to many marginalized people and regions.

Green New Deal Cons: The Green New deal has been criticized by Republicans and conservatives as being too expansive and too expensive. They say that the legislation would increase taxes which would affect people on both ends of the economic spectrum as well as big corporations. Green energy has been criticized as having a low output, and the massive funding to upgrade America’s infrastructure would cost trillions of dollars. Solving the problem of power storage during times of low production is also an expensive endeavor that would take lots of money and resources. Depending on the scale of the project, and how it is funded, it could potentially leave us with the burden of much more national debt to pay in the future.

However, it is also highly possible and feasible that the expense of the green new deal could fall mostly upon (and could easily be paid for by) the largest companies and highest income earners. The only real drawback would be that many people in the non-renewable energy sector would eventually lose their jobs and have to find replacement positions, and the fossil fuel industry would essentially shrivel up and die. This is, of course, unacceptable for the fossil fuel industry, which is why fossil fuel companies have maintained a decades-long misinformation campaign to slow change and create confusion and conflict in both the public and political spheres. Needless to say, their efforts have succeeded with flying colors.

The only other con regarding the resolution is that it contains no plans to eliminate the monetary system and address the true causes of resource overshoot (which includes the problem of climate change) and massive inequality. It leaves the profit motive unaddressed, which is the main driver behind the overexploitation of both people and resources, and perpetuates the scale and scope of the oppression, discrimination, and huge wealth gaps that we continue to see today.

There is no mention of the obsoletion of the capitalist system, or the possibility of large-scale elimination of human labor, driven by the possibility of technology and automation. There is zero admission of the lack of sustainability in leaving the current monetary system intact, and that the rampant consumerism and resource overshoot would likely continue largely unmitigated underneath a “green capitalist” system.

After weighing the green new deal pros and cons, we think that while the proposal is definitely a step in the right direction, it ultimately doesn’t go far enough. It still allows the monetary system, with all its inefficiencies and the myriad externalities it produces, to remain at the helm of our economy and society. It allows our market system to continue to promote and incentivize endless consumerism, overconsumption, overexploitation, resource overuse, and constant, needless activity. As much as conservatives are afraid of losing all their jobs, it’s many of those “jobs” that are using endless amounts of fossil fuels and other resources unnecessarily, simply for the sake of people having to work to “pay the bills” and survive.

Many of the jobs that exist today are what the late anthropologist and author David Graeber called “bullshit jobs” — or jobs that contribute nothing to the true needs of humans or our environment. Jobs that use resources, while promoting even more consumption and exploitation, just for the sake of generating economic activity and profits.

All for a buck. Because that is the purpose of a business, first and foremost — to generate profits. If a business cannot generate profits somewhere down the line, it is not considered a viable business. This is why profits tend to come before environmental considerations or the equity/welfare of workers or employees in nearly any business.

Without the elimination of the monetary system, our society cannot possibly mitigate or curtail the degree of resource overshoot that is possible if we were to eliminate that system and restructure society around true economic efficiency and sustainability.

Without the monetary system, we would be able to curtail a large degree of unnecessary resource use and activity, while simultaneously providing impoverished communities with the resources and support they truly need. While the green new deal pros and cons are definitely things to consider, we ultimately need more fundamental, systemic changes than the resolution demands. 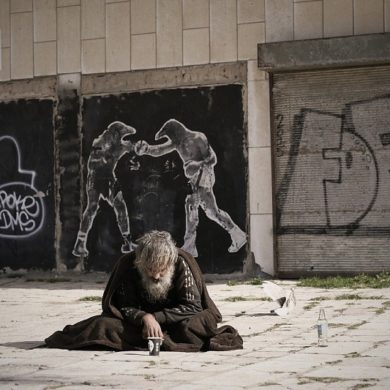